Safetipin is a social enterprise providing a number of technology solutions to make cities safer for women and others. Safetipin use apps to collect information and engage with individuals, and provide back-end solutions for large-scale data collection and analytics, working with governments, NGOs, city planners, international agencies and corporates to provide and use safety data for change.

Dr Viswanath has been working on issues of urban safety and inclusion for women for over 20 years. She is the co-founder of Safetipin, a mobile app developed to support community and women’s safety and has worked as a consultant for UN Women and UN-Habitat. She has spearheaded the Safe Delhi for Women initiative led by Jagori, an NGO based in Delhi, since 2005, provided technical support to safe city for women programs in Cambodia, Pakistan, Indonesia, Vietnam, Kerala, Mumbai and Kolkata and is a Board member of the International Centre for the Prevention of Crime (ICPC), the Chair of the International Advisory Committee of Women in Cities International (WICI) and Chair of Jagori. Kalpana has also published widely in magazines and journals and Co-edited a book on building Gender Inclusive Cities (Routledge, 2012).

Jagori (‘Awaken, Women!’) was set up in 1984, as a Women’s Training, Documentation and Communication Centre, with a vision of helping to build a just society through feminist values. It has built on the early work of its founding members who highlighted issues of violence against women (VAW), in particular around dowry murders, custodial rape and other forms of violence during the late 70s and early 80s at a time when these issues were shrouded in utmost silence. From pioneering feminist training methodology in India and designing feminist resources for rural and/or neo-literate women to anchoring a region-wide campaign to end gender-based violence, Jagori has developed holistically over the decades. Its multi-pronged spectrum of feminist intervention includes action research studies, social and safety audits, counselling and referral services for survivors of violence, para-legal work, sensitisation of stakeholders, and community leadership building. Jagori works with marginalised women in urban and rural areas on issues of violence against women, women’s safety, rights and entitlements, and leadership development. Jagori’s thematic canvass comprises issues such as domestic workers’ rights, public infrastructure, essential services and gender sensitive governance.

Jagori has pioneered the development of the initial architecture and strategic framework for implementation of safer cities in the state of Delhi, since 2004. Since 2009, in partnership with UN Women, UN Habitat, government and other partners, focus has been on scaling up the Safe Cities model. This initiative has since expanded, encompassing numerous issues through public outreach, community action, research and education, capacity development of civil society and state agencies on gender-inclusive methodologies to address gender gaps on women’s safety. The organisation continues to advocate for women’s rights as part of the SDG Goals 5, 6, 11 and the New Urban Agenda framework of ensuring gender equality across all goals.

The Center for Urban Design Innovation (CUDi) is the applied research and innovation wing of the Department of Urban Design within the School of Planning and Architecture, New Delhi (SPA). The School of Planning and Architecture is an ‘institute of national importance’ as stated by the government of India and is one of the most prominent and significant institutions dedicated to the learning and teaching of issues of the habitat and the built environment in the fields of architecture, design and planning. The Department of Urban Design in the School of Planning and Architecture has been involved with questions of contemporary urbanism with specific reference to Indian and Asian contexts through numerous projects and academic initiatives over the last 50 years. CUDi conducts research and design innovation explorations through the Urban Form Lab which is a platform for collaborative engagements on issues of urban environment and their relation with urban form. It is envisaged as an autonomous, inter and multi-disciplinary space for critical debate, creative exploration and research by design. The Urban Forum Lab is also seen as a bridging initiative encouraging the convergence of academia, industry, government and community for devising collective and cooperative ways of co-development to address contemporary problems and the future prospects of our cities. 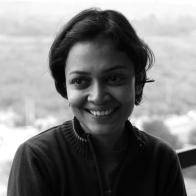 Rwitee Mandal is currently a visiting faculty member in the School of Planning and Architecture, New Delhi Postgraduate Urban Design Programme. She is also Senior Program Manager at Safetipin. She is an Architect and Urban Designer from the School of Planning and Architecture, New Delhi, India. She has worked as a consultant and adviser on both green-field neighbourhood designs and inner-city interventions in India. Her primary expertise lies on the subject of ‘gender and space’ and she has worked in varied capacities with women-centric organisations and citizens groups.

Follow Gendering the Smart City on WordPress.com
Join 17 other followers